Pachauri admits: "People are preoccupied with other problems" - not global warming 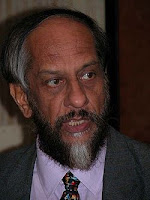 For once the "Nobel Peace Prize laureate", former railway engineer Rajendra Pachauri has said something sensible:


Moves to tackle climate change have run into public “inertia” in the face of economic uncertainty, mounting debts and the ongoing eurozone crisis, according to the 2007 Nobel Peace Prize winner Rajendra Pachauri.


“People are preoccupied with other problems,” said Pachauri, who chairs the Intergovernmental Panel on Climate Change and heads TERI, an Indian research and policy institute.
“There is inertia within the entire system, and we are seeing that inertia at work. Over the past few years people become more focused on other things, leading to a shift in motivation.”
One sign of this apathy on a governmental level is the so-called Green Climate Fund, a financing initiative floated at the Copenhagen Summit in 2009. The GCF was created as a conduit to channel up to $100 billion a year into environmental projects in emerging markets by the 2020.
Pachauri said the project had not moved on much since then, noting that “no concrete commitments have been made on [GCF so far]."
Of course Pachauri did not applaud the positive development away from global warming alarmism, but at least he has noted the fact that "people are proccupied with other problems" - real problems. Pachauri´s statement with regard to the Green Climate Fund just shows that the senseless "decision" to launch the fund was only a face-saving device, never meant to be taken seriously. Still the project is going to cost taxpayers in industrialized countries billions, because the plans to build a heavily staffed headquarters are proceeding, never mind that "no concrete commitments have been made".