Quote of the week: Nigel Farage on wind farms

Nigel Farage (UKIP) says it all:

“I’d like to blow them all up. I don’t think I’ve ever seen a single issue in my life more insanely stupid than despoiling our green and pleasant land and our seascapes with ugly bird- and bat-chomping monsters that don’t work.”
Upplagd av NNoN kl. 09:25 No comments:

James Cameron and the usual lineup of celebrity "correspondents" - including Harrison Ford, Matt Damon, Don Cheadly and Jessica Alba - have made an incredible number of high carbon footprint flights "all around the globe" in order to bore people with yet another "multi-part television event" of global warming scaremongering:

This April, James Cameron joins forces with producer Jerry Weintraub and Showtime for Years of Living Dangerously, a multi-part television event that focuses on the effects climate change has on the environment and its citizens all around the globe.
In eight episodes, the series will travel everywhere from Texas to Maine, the Middle East, the North Pole, Bangladesh, the South Pacific and more. Along for the ride are a number of celebrity correspondents, who meet with those affected by climate change and hear their stories. The list of celebrities includes Ian Somerhalder, Harrison Ford, Matt Damon, Olivia Munn, Jessica Alba, Don Cheadle, America Ferrera, and Michael C. Hall.
The first trailer for the television event shows the correspondents traveling around the globe, talking to both experts and everyday people affected by climate change.

Entertainment Weekly gives you a chance to watch the trailer of this disaster to come.
Upplagd av NNoN kl. 05:03 No comments:

Russian Academy of Sciences: Global warming over in Central Asia

Global warming is over in Central Asia, and a new cooler period is ahead, according to Russian Academy of Sciences scientist Andrei Daryin:

Studies of the bottom sediments in lakes in Siberia, Kazakhstan and Mongolia testify to the forthcoming cooler period in Central Asia, senior researcher of the Russian Academy of Sciences Siberian branch's V.S. Sobolev Institute of Geology and Mineralogy Andrei Daryin said.
"We think temperatures in South Siberia stopped climbing in 2010-2011 and a decline is about to start," Daryin told reporters on Monday.

In his opinion, regional temperature measurements supported the prognosis.--

Daryin said the research showed whether the latest rise in temperatures was something unique or not.
"Whenever we look a thousand years back, it appears that the situation is not that unique. A temperature rise comparable with today's parameters already happened 1,000 years ago," he said.
In fact, climate change cycles correlate with solar activity, the expert continued.

Bill McKibben picks up US $ 100,000 Norwegian prize - and asks Norway to close down its oil and gas industry

This week Eco-fundamentalist Bill McKibben took a high carbon footprint flight to fossil fuel rich Norway - "the country I love the most beyond my own"" - in order to pick up the Sophie Prize, "an international award (US $ 100,000), for environment and sustainable development".

One wonders what the Norwegians thought about McKibben's speech at the prize ceremony, in which he in effect urged Norway to close down to its entire fossil fuel industry - the source of the country's riches:

"And here Norway’s sovereign wealth fund, as the largest single investor on the planet, has a crucial role to play. It is time for Norway to end its investments in fossil fuel. Yes, that wealth was built on oil, mostly in a time when we didn’t understand its peril. But now it needs to be invested in the future, not the past.
Morality demands no less. If it is wrong to wreck the climate, then it is wrong to profit from the wreckage. And if Norway takes this step, it will reverberate. It won’t immediately end climate change; many other strategies are needed."
Upplagd av NNoN kl. 00:41 No comments:

"A visitor approaching the building from the banks of the Main River enters a tall atrium made of steel, glass and pale stone surfaces. People shrink to the size of mice within the atrium. In the animation, the camera breezes past hanging gardens and giant steel beams that support the two halves of the building. There are substantial offices with floor-to-ceiling windows. The high point is the large ECB assembly hall for the ECB Council, under a glass dome on the 43rd floor, 180 meters above the ground. It's the kind of space that might accommodate a global government in a science fiction film."

Der Spiegel's description of the virtual tour on the ECB's website


Austerity for ordinary European taxpayers - luxury for the chosen few who will be working in the European Central Bank's new 45 story skyscraper, which according to the bank will "stand as a visible symbol of the ECB’s identity". That is, if an when it ever will be ready.

And the price tag for the taxpayers just keeps on growing:

Estimated costs for the European Central Bank's new headquarters in Frankfurt have more than doubled. As has been happening with so many major projects in Germany, its construction has been plagued by poor planning, oversight and execution -- and endless delays.

It was May 19, 2010. Jean-Claude Trichet, the ECB's president at the time, had invited his guests to a dicey part of the city for the groundbreaking ceremony. They gathered in front of the building pit, from which a futuristic tower was to arise: an architecturally thrilling, 45-story skyscraper, a symbol of the power of Europe's shared currency.

Three-and-a-half years later, in the fall of 2013, there is a different reality in Frankfurt's Ostend district. Instead of the original estimated cost of €500 million ($690 million), the entire project will now cost at least €1.15 billion and could even eventually climb to €1.3 billion. The ECB has also had to postpone its move. Originally scheduled for completion in 2011, the building is now not expected to be ready for occupancy until at least the end of 2014.---

The demands of the project's European managers were apparently as sky-high as the new tower. Vienna-based architect Wolf Prix and his firm, Coop Himmelb(l)au, had designed the building as two twisted towers connected by hanging gardens, made almost entirely of glass and steel. The skyscraper looks more like a giant sculpture than an office building.
With a number of euro countries groaning under their debt burdens, provoking angry protests from Greece to Portugal, the aesthetics and features of the ECB tower seem oddly inappropriate. Do the taxpayer-funded central bankers really need a headquarters building that is 30 meters (98 feet) taller and twice as expensive as the twin towers of Deutsche Bank, Germany's largest bank?
When the monetary watchdogs move into their new home, their offices are likely to be among the most expensive in the euro zone. As the complex will house about 2,000 employees and cost more than €1 billion to build, each workspace will be worth about €600,000, or as much as a very comfortable single-family home. In commercial real estate, €30,000 per desk space is usually considered "upscale."

Germans are beginning to see the reality of Angela Merkel's hastily undertaken energy transition policy. The huge subsidies for wind and solar power have led to ever increasing utility bills both for households and businesses in Germany, and - what is really worrying - the stability of Germany's electricity generation is at risk.

The German think tank Hamburger Weltwirtschaftsinstitut (HWWI) has now published a study, according to which the cost of even a short energy blackout - one hour - would be close to 600 million euro - no small amount, even in rich Germany. 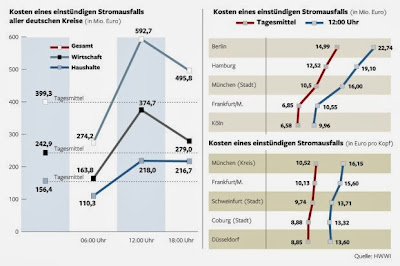 Particularly Germany's industrial engine in the south should be worried, according to the study:

In the light of past experiences in Germany, the scenario of a county-wide blackout underlying our analysis may seem unlikely. However, recent studies point to considerable dangers for network security resulting from the shift in German power supply towards renewable energies (Dena, 2010). In this regard, a major drawback of electricity generation through wind and solar energy is its dependence on current weather conditions. An ongoing expansion of these energy sources will thus cause overall power supply to become more volatile and less predictable. In general, this renders the task of balancing feed-in and consumption volumes at each point in time more difficult for network operators. This is aggravated by a spatial shift of generation capacities. Due to climate conditions, the installation of wind turbines tends to be more profitable in the northern part of Germany, especially when considering the potentials of offshore wind parks. Already today, the result is a gap in the supply potential of electricity between North and South. At the same time, high-demand areas are still concentrated in West and South.---

A North-South divide is apparent, where the north appears more saturated in terms of electricity. In the South, only a few counties have high levels of electricity saturation, which are the locations of larger conventional power plants. Considering the fact that several of the nuclear power plants, primarily located in the South, have been terminated in 2011 and the remaining are set to be shut down in 2022, the level of electricity autarky in southern Germany will further be on the decline. The consequential need for long-distance power transmission will put further pressure on transmission capacities.

No wonder then that the CEOs of Europe's four largest energy companies recently called for an end to subsidies for wind and solar power:

The stability of Europe’s electricity generation is at risk from the warped market structure caused by skyrocketing renewable energy subsidies that have swarmed across the continent over the last decade.
This sentiment was echoed a week ago by the CEOs of Europe’s largest energy companies, who produce almost half of Europe’s electricity. This group joined voices calling for an end to subsidies for wind and solar power, saying the subsidies have led to unacceptably high utility bills for residences and businesses, and even risk causing continent-wide blackouts