The negative effects of development aid 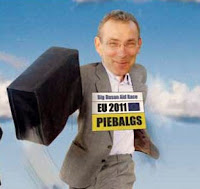 It is encouraging to note that more and more economists and other experts in the developing countries have began to question the prevailing politically correct western aid ideology. One such voice of sanity -regrettably anonymous -  comes from Sierra Leone. His - or hers - wise thoughts about the negative effects of the dependence on aid are published on the allAfrica.com webpage:

I think aid has made my country, by and large, poorer and the prospect of economic growth dismal. This man-made "humanitarian disaster" has left Sierra Leone with a huge debt burden and a poorly managed economy. It has increased poverty and corruption, created an inflationary prone market and discouraged foreign investments. But we have a choice to change course and find responsible ways to better manage our debt and economy. Otherwise, we will always see our promising young men and women languishing in the corners of our streets with no job or income to support their families.
Furthermore, the size of our international debt and the risk level has made investors less attracted to finding good market in Sierra Leone. And why do we have a huge percentage of our national budget largely coming from the Department for International Development (DFID) in the United Kingdom (UK), the European Union (EU), China, Japan and the United States of America? Why do we seem to believe that investors can bring their capital investments when they know we cannot even account for our own money let alone the "aid dollars" they give us?
---
Frankly, Sierra Leone must take the long road that leads to a donor-free economy with an investment strategy that establishes job creation, access to capital markets and surplus foreign reserves. Our nation must participate in the China "new African initiatives" of large scale investment in infrastructure. We must increase free trade with the European Union (EU), Japan and the United States in agricultural products (not only mineral resources).
---
But we are seriously a long way from reducing our dependency on aid and the culture of debt that has paralyzed the economic spine of our government. We need some strong leadership to take us out of the depressive state of our donor addictions. We need a debt management strategy with comprehensive national debt laws that will help to bring our spiraling debt under control.
As the Zambian Economist, Dambisa Mayo categorically said: "Aid has been and continues to be an unmitigated political, economic and humanitarian disaster for most part of the developing world" and for Sierra Leone, it is time to end that dependency which has fostered too much corruption, discouraged economic creativity that leads to innovation and prosperity for all.


However, these sensible thoughts are not shared by the representatives of the world's biggest development aid donor, the European Union. The EU´s development commissioner, former Latvian politician Andris Piebalgs e.g. is mainly focusing on the amount of money poured into the developing countries - often easily finding its way to the coffers of less than democratic regimes.

Here is a recent example of  the commissioner´s thinking:

But this is no reason for complacency and I stressed in April that aid budgets must be increased if we are to meet our ambitious goals for 2015 and remain credible. I still believe that despite the temporary set backs we will reach the target on time. It’s really in everybody’s interest to invest in developing countries and help them to get on the right track of inclusive growth and development.
--
Our commitment is also noticeable if you look at the numbers. EU aid to Least Developed Countries (LDCs) increased by 78 % from €8.3 billion in 2000 to €15 billion in 2010. The share of Gross National Income (GNI) spent on aid to LDCs rose from 0.09% in 2000 to 0.13% in 2010. The EU is still by far the largest donor to the LDCs (56 % of aid worldwide in 2010). The share of Commission-managed EU aid to the LDCs rose from 21.6 % in 2000 to 29.9 % in 2009.