Congratulations EU!: The man who led Finland to economic catastrophe, will now be in charge of jobs and growth!

The fact that former Finnish PM Jyrki Katainen will be in charge of jobs, growth, investment and competitiveness in Juncker´s new European Commission illustrates what is wrong with the European Union.

Judge yourselves whether the new Vice-President for Jobs, Growth, Investment and Competitiveness is the right man for his job after reading what Björn Wahlroos, former economics professor and probably the most influential Finnish business executive and investor right now, has to say about the government Katainen led:

Finland is in a “catastrophic” and “murderous” economic situation, facing a challenge greater than in the doldrums of 1991, estimates Björn Wahlroos.
The outspoken tycoon refers to a recent interview in which Anders Borg, the Swedish Minister of Finance, suggested that Finland is a cautionary example of how a country can destroy its competitiveness.
“We messed up a couple of labour market agreements and tried to rectify that with measures that further increased labour market rigidity. Costs crept up. The results are evident: jobs keep on disappearing,” states Wahlroos.

A traditional measure of the competitiveness of an economy is to examine its terms of trade – the value of its exports relative to that of its imports. “In Finland, it has deteriorated by 30 per cent, which is unusual. In the meantime, wages have increased by 40 per cent,” lists Wahlroos.
“Wages have crept up by 20 per cent over the past six years alone – during a period when the gross domestic product has failed to grow one bit. In fact, it has dropped. If you're asking whether this is a problem, the answer would be yes!”
Industries, in turn, have refrained from making major investments after the financial crisis swept over Finland in 2008. “A substantial amount of jobs has disappeared. And here's the regrettable part: more will disappear,” predicts Wahlroos. --

In effect, the Government of Stubb continues to carry out the government programme hammered out by the Government of Prime Minister Jyrki Katainen (NCP) in 2011. “It's founded on as bad a premise as possible. What's regrettable in terms of political history is that it was founded on a bad premise partly knowingly,” Wahlroos states.

Katainen resigned as captain of the sinking Finnish ship in June in the knowledge that he would be rewarded for his failure with one of the exorbitantly well-paid EU top jobs. You´ll never walk alone, if you belong to the "club" ....

The West must stop opposing Vladimir Putin’s incursion into Ukraine and join forces with the Russian leader in the fight against Islamic extremists, Nigel Farage has said,

The Ukip leader said that Western countries must stop "playing war games in Ukraine and poking the “Russian bear with a stick” because Mr Putin is “on our side” in the war against Islamic extremism.
Mr Farage courted controversy earlier this year when he said that Mr Putin, the former KGB officer, is the statesman he most admires.
In a debate this morning at the European Parliament Mr Farage a sympathetic interpretation of Russia’s invasion of Ukraine, he said European states had “directly encouraged” the uprising that “led in turn to Vladimir Putin reacting”.
Mr Putin has been blamed by the West for prolonging the bloodshed in Syria and propping up the regime by supplying arms including helicopter gunships to President Assad, and repeatedly blocking moves to censure or sanction him at the United Nations.

Mr. Farage is totally wrong on this. I have a lot of sympathy for his criticism of the present European Union, but to defend the criminal and corrupted dictator Putin is unacceptable.

Former UK Defense Secretary: Putin has the potential to be as dangerous as Stalin 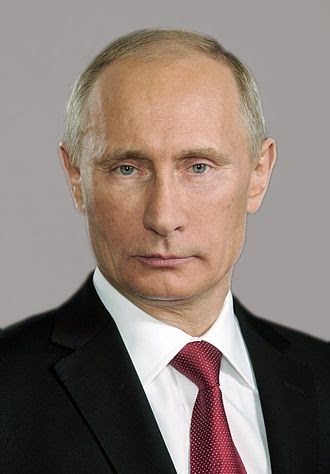 Former UK Defense Secretary Bob Ainsworth argues that Vladimir Putin has the potential to be as dangerous as Stalin:

As President Obama steels himself to do what he has tried to avoid, namely increase US military involvement in the Middle East, we should try to keep in perspective that he and the rest of us face a more significant threat.
The extremists of the Islamic State are an affront to our sense of humanity but they are non-state actors who could be dealt with if the politics and governance of the states in the region can be improved.
However, the situation in the Ukraine is of a different magnitude.
President Putin, having previously dismembered Georgia, is now involved in the same activity in Ukraine. Crimea has already been annexed to Russia and now the full ambitions of the Russian puppets in eastern Ukraine are becoming clear.
They plan the creation of  “New Russia” a state that would take in the eastern and the whole of the southern part of the country all the way to the Romanian border.
No leader of a major power has behaved as overtly aggressively since Stalin in the post war period, and sadly Putin would be very pleased with the comparison.
He has said the demise of the Soviet Union was the greatest tragedy of the 20th century and he claims the right to act on behalf of Russian minorities in other states.
As there are Russian minorities throughout the old Soviet Union and far wider he is in principle claiming the right to interfere in the affairs of all of the independent sovereign states of Eastern Europe.
Stalin’s policies pushed the world into the Cold War; Putin has the potential to be equally as dangerous.
No sensible person wants, in the face of the many other challenges, to be forced to find money for increased spending on arms. No one wants the economic consequences that extensive sanctions against Russia will have on our own economies, but Putin will not be deterred by resolutions passed at Nato or EU summits.
So unless we want to gamble that this systematic aggression will fizzle out in the face of inactivity, and history tells us that doesn’t happen, we must find effective ways to deter him.
Both Nato and the EU have made a start but the small and reluctant steps taken so far sadly are not likely to be nearly enough.
All Nato countries should commit to reverse the recent decline in defence spending.
At the European level there is an urgent need to develop a strategy to decrease our heavy dependence on Russian energy.

Ainsworth is of course right, but the question is whether the present western leaders are prepared to act before it is too late.