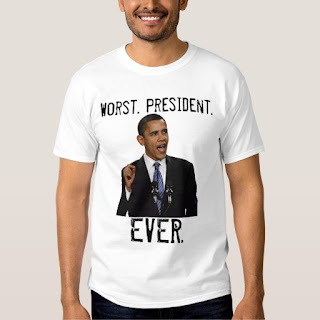 According to David Cameron, his "very good friend", pictured in the best selling t-shirt above, has always been "someone who gives sage advice".

This was Obama´s "sage advice" in London yesterday:

“And on that matter, for example, I think it’s fair to say that maybe some point down the line there might be a UK-US trade agreement, but it’s not going to happen any time soon because our focus is in negotiating with a big bloc, the European Union, to get a trade agreement done”.

“The UK is going to be in the back of the queue.”

Obama will of course, and fortunately, be gone when a new trade deal between the US and UK is to be negotiated. So, his "advice" is of no value whatsoever.

No wonder Obama has been chosen the worst US President since WW2. His brazen meddling in UK politics will certainly be utterly ignored by the British voters, when they have a chance to vote for leaving the Titanic called the Europea Union!

An excellent summary by Stephen Pollard:

You would have to be mad to take lessons in foreign policy from this of all US presidents. He tells us that our membership of the EU is vital to European and even world security.
This from the man who has reduced the world standing of the US to such a joke that President Putin knew he would be able to grab an entire section of Ukraine while the US – and, yes, the EU – simply stood by and watched.

Email ThisBlogThis!Share to TwitterShare to FacebookShare to Pinterest
Tags: Brexit, EU, UK, US

The legacy of Nelson Mandela is in danger: 50 people are murdered in South Africa every day - 20 of them are whites

"Virtually every week the press here report the murders of white farmers, though you will not hear much about it in the media outside South Africa", the BBC:s John Simpson reported already in 2013. And nothing seems to have changed since then, except that there are now even more murders ...

Here are some excerpts from articles and reports that might interest you:


South Africa's murder rate has increased for the third year running, with opposition groups saying the figures mirror "a country at war".
The murder rate jumped 4.6 per cent with 17,805 murders committed between April 2014 and March 2015, an increase of 782 deaths from the year before. Almost 49 people were killed every day in a country of 52 million people.
Armed robberies, burglaries and carjackings also increased. Instances of truck hijacking had the biggest leap with a 29 per cent increase on the previous year.
Police pointed to a decline in rape and assault as a positive sign but analysts said it indicated another problem: that South Africans were failing to report crime because of a loss of trust in the police.


Virtually every week the press here report the murders of white farmers, though you will not hear much about it in the media outside South Africa.
In South Africa you are twice as likely to be murdered if you are a white farmer than if you are a police officer - and the police here have a particularly dangerous life. The killings of farmers are often particularly brutal.


Afrikaner farm owners are being murdered at a rate four times the murder rate of other South Africans, including Black farm owners. Their families are also subjected to extremely high crime rates, including murder, rape, mutilation and torture of the victims. South African police fail to investigate or solve many of these murders, which are carried out by organized gangs, often armed with weapons that police have previously confiscated.  The racial character of the killing is covered up by a SA government order prohibiting police from reporting murders by race.  Instead the crisis is denied and the murders are dismissed as ordinary crime, ignoring the frequent mutilation of the victims’ bodies, a sure sign that these are hate crimes.
However, independent researchers have compiled accurate statistics demonstrating convincingly that murders among White farm owners occur at a rate of 97 per 100,000 per year, compared to 31 per 100,000 per year in the entire South African population, making the murder rate of White SA farmers one of the highest murder rates in the world.
Incitement to genocide is a crime under the International Convention for the Prevention and Punishment of the Crime of Genocide, to which South Africa is a state-party.
The ANC government has promoted hate speech that constitutes “incitement to genocide.”  The President of the ANC Youth League, Julius Malema, revived the "Kill the Boer, Kill the Farmer" hate song at ANC rallies, until it was declared to be hate speech by a South African judge, and Malema was enjoined from singing it.  For other reasons, Malema was later removed as ANCYL President.  His followers continue to sing the hate song, and the Deputy President of the ANCYL has called for “war,” against “white settlers.”
After the judge’s injunction to halt singing of the hate song, even the President of South Africa, ANC leader Jacob Zuma, himself, began to sing the “Shoot the Boer” song.  Since Zuma began to sing the hate song on 12 January 2012, murders of White farmers increased every month through April 2012, the last month for which there are confirmed figures.
There is thus strong circumstantial evidence of government support for the campaign of forced displacement and atrocities against White farmers and their families.  There is direct evidence of SA government incitement to genocide.

Boris Johnson to Obama: "Americans would never contemplate anything like the EU, for themselves or for their neighbours"

"For the United States to tell us in the UK that we must surrender control of so much of our democracy - it is a breathtaking example of the principle of do as I say but not as I do.
"It is incoherent. It is inconsistent, and yes it is downright hypocritical. The Americans would never contemplate anything like the EU, for themselves or for their neighbours in their own hemisphere. Why should they think it right for us?"

Email ThisBlogThis!Share to TwitterShare to FacebookShare to Pinterest
Tags: Brexit, EU, UK, US

Niall Ferguson: "Margaret Thatcher was right about most things"

Margaret Thatcher and Ronald Reagan were the kind of leaders that the West would dearly need in these turbulent times, when so many politicians seem to have lost touch with reality. That is why it with great pleasure I urge you to read professor Niall Ferguson´s brilliant article on the Iron Lady:

It is still terribly hard for those who opposed her to admit it, but Margaret Thatcher was right about most things.
She was right that Britain’s trade unions had become much too powerful. She was right that nationalised industries had to be privatised. She was right that inflation has monetary causes.
She was also mostly right about foreign policy. She was right to drive the forces of Argentina’s junta out of the Falklands and she was right to exhort a “wobbly” George H.W. Bush to mete out the same treatment to Saddam Hussein’s forces in Kuwait.
Though labelled the “Iron Lady” by a Soviet magazine, her hawkishness in the cold war did not blind her to the possibilities of doing business with Mikhail Gorbachev. Like Ronald Reagan, she was quick to see the opportunity offered by his policies of glasnost and perestroika.
The outcome of the cold war seems inevitable with the benefit of hindsight. But for most of the 1980s, Thatcher had to endure a relentless stream of criticism from fellow travellers and useful idiots: believers in unilateral disarmament who would gladly have allowed the Soviets to establish dominance in intermediate range nuclear forces in Europe, as well as exponents of “convergence theory”, who insisted that the countries of Nato and the Warsaw Pact were gradually and peacefully growing alike (give or take the odd gulag). Above all, however, Thatcher was right about Europe. She was right to push Europe in the direction of real free trade by backing and signing the Single European Act of 1986. Yet she was equally right to oppose the idea of a single European currency.
On this issue, the Financial Times, as well as a great many other respected publications, owes Thatcher not only the respect due to a great leader, but also an apology. Throughout the 1980s, many critics consistently heaped opprobrium on her for resisting the efforts of her own cabinet to get sterling into the European exchange rate mechanism.
Consistently, Thatcher’s sceptics took the side of those, such as Nigel Lawson, Geoffrey Howe and John Major, who favoured “shadowing” the Deutschmark and then pegging the sterling-mark exchange rate.

I  am convinced that Margaret Thatcher would vote for Brexit, if she still were with us.

Fortunately Nigel Lawson has seen the light, and is now a leading figure on the Brexit side!

Former German Chancellor Helmut Kohl is not afraid of telling the truth:

"Europe cannot become a new home for the millions of people in need throughout the world," Kohl was quoted as saying.
Germany's liberal refugee policy last year ushered in 1.1 million asylum-seekers from Syria, Iraq and elsewhere. --

Many migrants "come from different cultural environments," he added. "For the most part they have a belief which is different from the Judeo-Christian beliefs which form part of the foundations of our social order and our values."

Spare us another couple of months of hair-raising panic attacks by Remainers like Stephen Crabb for whom the days when the British people used to make their own laws and elect their own governments where back in the dark ages, indeed before he had even started school.
Beware of the reckless fools who advocate Brexit, he warns us. Should we leave the EU he says, our unemployment rate would soar to match those in Greece and Spain. What is more, he quotes all those wise men of the grand economic forecasting who failed to see the last great financial crisis coming, but kept their jobs to get it wrong again.

Well, I offer him and all his Remain colleagues a warning given by Gladstone 125 years ago:
"The finance of the Country is intimately associated with the liberties of the Country. It is a powerful leverage by which English liberty has been gradually acquired ... It lies at the root of English liberty, and if the House of Commons can by any possibility lose the power of the grants of public money your very liberty will be worth very little in comparison ... That powerful leverage has been what is commonly known as the Power of the Purse, the control off the House of Commons over public expenditure, the root of English Liberty."
Gladstone ended with a final warning: "If these powers of the House of Commons come to be encroached upon, it will be by tacit and insidious methods, and therefore I say that attention should be called to this."
And during Mr Crabb's lifetime how those liberties have been encroached upon?
How many of those eminent persons and institutions now forecasting disaster should we dare to reclaim our right to govern ourselves were, not long ago, forecasting disaster unless we joined the eurozone?
But nothing restrains the audacity of the Remain faction of our deeply divided Government.