The Economist on Russia's aggression in Ukraine: "Not to respond to renewed Russian meddling would be dangerous and wrong"


The Economist's editorial should be a wake up call to all appeasers in the west (such as David Cameron, Angela Merkel, Francoise Hollande). The dictator of the mafia state Russia must be stopped before its too late!:

Not to respond to renewed Russian meddling would be dangerous and wrong. If the rebels start losing ground, the Russians may step up their support. Mr Poroshenko still plans to sign the trade deal with the EU that was spurned by his predecessor, Viktor Yanukovych, last November, triggering the Maidan protests in Kiev that led to Mr Yanukovych’s departure. Ukraine’s government needs further support. The EU should accelerate efforts to become less reliant on Russian energy. That implies guarding against a gas cut-off by completing interconnectors that allow supply from the west as well as the east, searching for new gas sources and building more terminals for liquefied natural gas. It also means that the EU must pursue vigorously its antitrust case against Gazprom, which operates as a monopolistic arm of the Russian state, not a normal firm.--

A third round of sanctions is also needed. The goal of the first two rounds was to persuade Mr Putin to stop meddling in eastern Ukraine. So far he seems to have shelved thoughts of full-scale invasion, but he is intervening more than ever. Appeasers fret that fresh sanctions could provoke more Russian hostility. Yet, as NATO’s deputy secretary-general has noted, Russia has already chosen to treat NATO as an adversary, one reason why countries such as Sweden and Finland are considering joining (see Charlemagne). There is much scope for further Russian revanchism in places like Moldova or Georgia.
Experience shows that the only way to deter bullying is to stand up to it, even if that comes at a price. Having threatened a third round of sanctions, the West should make good on its threats—unless and until Mr Putin stops nakedly interfering in eastern Ukraine. Anything else would be an invitation.
Upplagd av NNoN kl. 08:38 No comments:

Germany, France and the UK are unwilling NATO allies in the fight against Putin's aggression

In spite of some tough words, Germany, France and the UK are unwilling to do very much against dictator Vladimir Putin's aggression. Business interests dictate their lame response:


Yet the bigger surprise of March's Crimea crisis came from the west with Berlin's muted response to Russian aggression, and its rejection of Warsaw's calls for a stronger NATO response.
The German language has a new phrase for the political and business establishment's attitude: Russlandversteher, or "understanding Russia." Over half of Germans claim to "understand" Vladimir Putin's annexation of Crimea and the bloody conflict it is fomenting in Ukraine—in part blaming America's support for Kiev's democrats for provoking the Kremlin. A similar number oppose further sanctions on Russia. Chancellor Angela Merkel's rhetorically harder anti-Putin line finds little support in Germany.
For the past 25 years, the Poles were told that the new Germany would have their back. After German unification and the eastward expansion of the EU and NATO, as the reassuring slogan went, "When Germans now look East, they see the West"—namely Poland. Germany trades and invests more with Poland than with Russia. Yet Berlin's present approach evokes the memory of a Germany that once carved up Central Europe with Russia. No one's talking of another partition of Poland, but it's sobering to hear Polish officials grumble more about Berlin than about Moscow.
Further west, the continent's divisions get amplified. The French are moving ahead with the $1.6 billion sale of two Mistral naval assault vessels to Russia later this year over the objections of Washington and the newer NATO allies in Poland and the Baltic states. Britain has sold the City of London along with its soul for a pot of dirty Russian money.
Thus, the US remains Poland's only real ally, even under a weak president. One must hope that the next US president is somebody closer to the Reagan legacy than Barack Obama and somebody who would put real pressure on the main European NATO allies.
Upplagd av NNoN kl. 08:50 No comments:

The arrest of prominent human rights lawyer Pu Zhiqiang is further proof that China is a thugocracy:

His other alleged crime was "illegally obtaining citizens' personal information," Beijing police said on their official microblog, adding that the investigation into Pu is still ongoing.
Pu, 49, was detained in early May after attending a low-key seminar in a private home to mark the 25th anniversary of the Tiananmen Square massacre. State-run Global Times newspaper said in an editorial at the time that he had crossed "a legal red line" by associating himself with a topic still considered taboo in China.
Pu took part in the student-led demonstrations in 1989 that ended in a bloody military crackdown on June 4 of that year. He later become one of the best-known lawyers in China for defending human rights in courts as well as in the media. --


Pu's arrest comes as the latest development in a new wave of government crackdowns on human rights advocates. Police put nearly 100 people in detention or under house arrest before this year's Tiananmen anniversary, said Chinese Human Rights Defenders, a Washington-based monitoring group.
When President Xi Jinping took office in 2013, some activists hoped he would preside over a system more tolerant of dissent and discussion. His government, however, is now widely seen as tightening the screws on the work of activists and intellectuals, including the sentencing of Xu Zhiyong, another well-known human rights lawyer, to four years in prison in January after he pushed for financial transparency for senior officials.
Upplagd av NNoN kl. 04:06 No comments:

Ukraine's foreign minister is spot on: “Yes, Putin is a dickhead, yes,” 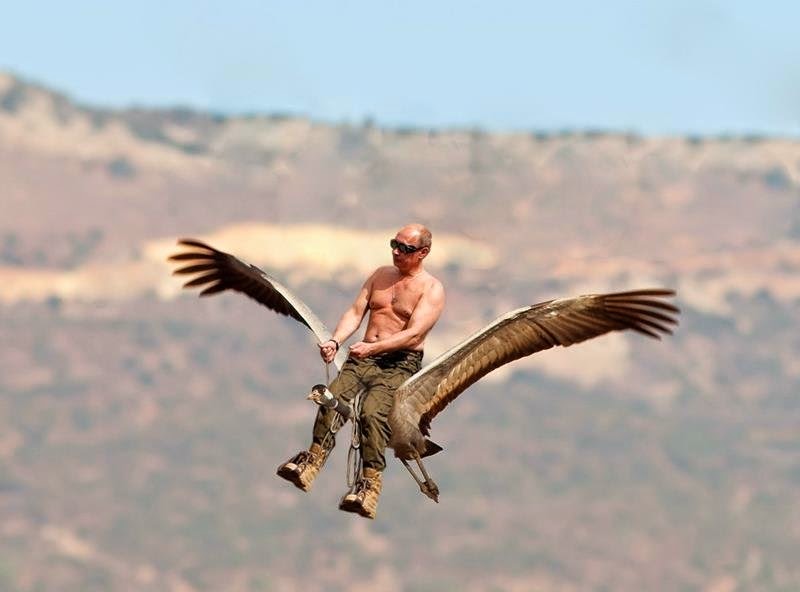 Ukraine's foreign minister Andriy Deshchytsia should be congratulated for telling the truth about Vladimir Putin:

Senior Russian parliamentarians urged Ukraine to sack its foreign minister for calling President Vladimir Putin a "dickhead" during a violent protest outside Russia’s embassy in Kiev.
Acting foreign minister Andriy Deshchytsia tried to persuade protesters not to use violence at the rally on Saturday evening, during which the Russian flag was ripped up, vehicles overturned and stones and eggs thrown.
“We must fulfill our international obligations, including defending the right of Russia to have an embassy in Ukraine,” he told protesters, angered by pro-Russian separatists shooting down a military cargo plane in east Ukraine, killing 49.
But challenged by the protesters, he added: “Did I say I am against you protesting? I am for you protesting. I am ready to be here with you and say ‘Russia, get out of Ukraine’.” He went on to say: “Yes, Putin is a dickhead, yes,” and the protesters responded by chanting the phrase. Russian Foreign Minister Sergey Lavrov has protested to the Organisation for Security and Co-operation in Europe about the rally and the US and the EU have condemned it.
Alexei Pushkov, head of the Russian lower house of parliament’s international affairs committee, said Ukrainian President Petro Poroshenko should dismiss Deshchytsia.
“Poroshenko should change his foreign minister. He doesn’t control himself very well,” Pushkov said on Twitter He went on to suggest in televised comments that Moscow should halt all dialogue with, and cut off gas supplies to Ukraine.

The reaction from Russia shows that Deshchytsia's description of Putin suites quite a lot of other people in this corrupted mafia state ...
Upplagd av NNoN kl. 11:47 No comments: