The "launch tour" of the Greenpeace luxury yacht Rainbow Warrior III continues in style. Having enjoyed the beautiful sights and sounds of the Swedish archipelago and Stockholm, the group of carefully selected activists on board a few days ago reached the shores of Spain, where they enjoyed a gourmet meal in Barcelona prepared by the famous Michelin star chef Diego Guerrero.

The five (or six?) course meal, with fish "caught the same morning by local artisanal fishermen" was "the best meal of my life", enthuses the activist Tracy:

The mess was transformed by staff and volunteers from our Spanish office under Diego’s direction into a fine dining lounge with linens, flower arrangements and a perplexing number of utensils. The setting inspired a transformation among the crew as well as, or was it Helena’s little black dress? Either way our best clothes came out of the bottom of the lockers and bags so we began to better fit the elegant scene.

We sat down with Ramon, musicians from the band Maez, el Pais blogger Mikel López Iturriaga and our Spanish colleagues to the first course called Mini Babybell which has won Diego national awards for pinchos and tapas. It’s a camembert and truffle creation that looked like, obviously, a mini babybell cheese.

The feast continued with other gourmet courses:

Next up Vieira – the scallops.

Then sukiyaki – a miso soup that looked like a cocktail, or a cappuccino?

Then an egg dish dumpling…

And the beautiful Gilthead bream - with orange and chocolate.

Breaking open the egg I discovered a gooey centre of mango surrounded by coconut cream the colour and consistency of a soft boiled egg. The shell was chocolate. Diego later told me the dish is called “This is not an egg”

After the exquisite dinner the evening continued in style:

The night was not over, three musicians from Maez performed on the deck of the Rainbow Warrior for the crew. Pablo has a beautiful voice, he sings in English and it’s worth listening to their new EP. A big thank you must go out to everyone who created such an amazing welcome to Barcelona for the ship and crew. You’re all stars.


As winter weather is making the Mediterranean chillier, we are looking forward to new and exciting reports from more exotic destinations on the continuing Rainbow Warrior III "launch tour". Could the next stop be somewhere in the Caribbean, where the cruise season now is at its best?

The Foie Gras and Vanilla Brulee, Quince-Pineapple Compote at Café Martinique on Paradise Island is worth waiting for!

It´s tough to be a Greenpeace activist these days!
Upplagd av NNoN kl. 10:48 No comments:

EU greenies are is still bullish about the European Court of Justice´s ruling that airlines based outside of the European Union must pay the controversial EU carbon tax. However, celebrations in Brussels are wildly premature. This is a fight - the EU against the rest of the world - that the European Union is bound to loose.


China has warned the European Union to abandon its controversial carbon tax on airlines or risk provoking a global trade war.
Adding weight to the warning, an industry insider told the Financial Times that the Chinese government was seriously considering measures to hit back at the EU if it insists on charging international airlines for their carbon emissions.


The threat of knock-on effects hung in the air, however, after a warning by US Secretary of State Hillary Rodham Clinton of possible reprisals some days ago.
The judgement “risks unleashing a trade war between Europe and the United States,” a high-ranking aviation source said.

A Christmas card from the Euro Rescue Fund

I cannot resist sharing with you this Christmas card, which I found in my mail today: 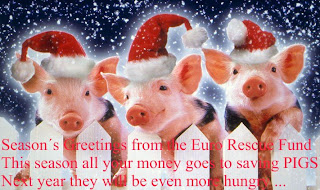 Happy Feet Two is the flop of the season. Who would like to see a penguin urinating on the camera?

Hollywood seems to have been thinking  that global warming fairy tales are still great money makers during the Christmas season. However, things did not turn out that way. Happy Feet Two, the sequel that "tells how one little penguin rallies his colony trapped by shifting ice due to climate change", has turned out to be the major flop of this Christmas season, a real global warming disaster:

After its first 10 days, the Antarctic-set toon had grossed just $43.8 million -- a little more than the $42 million that the Oscar-winning Happy Feet tap-danced to during its first three days in 2006. Unless business picks up overseas, where it has yet to open in most territories, director George Miller's $135 million production -- Warners split the cost with Village Roadshow -- is headed for the big chill.

And it not only Warners and Village Roadshow that will loose something on this failed production:

Due to the poor performance of "Happy Feet Two," 600 of the 700 employees at the digital production studio behind the animated movie have reportedly received their walking papers.
Employees at Dr. D Studios, which is based in Sydney, have been told they will be laid off in the coming weeks, according to IF.com.au.


Robin Williams, the Hollywood activist, who plays a fat penguin in Happy Feet Two,  has finally revealed why he believes in global warming. If you think it is because of the official IPCC scientific "consensus" or Al Gore, you are wrong:

Robin revealed that he was very impressed by his super hot co-star Sofia Vergara.

Robin told thehothits.com, "The moment she walks in the room, you believe in global warming. It's incredible. It's immediate."

It is of course a pity that audiences will not have a chance to share Mr. Williams´s experience, as Miss Vergara only appears as a voice in the film. Could that be one reason why the film has flopped?

These two reviews give some additional reasons:

Happy Feet Two continues the tradition of Antarctic penguins repetitively crying out horrific noises. Instead of shout-outs to Edgar Allan Poe, however, these penguins cry out dated pop songs. The horror, the horror.
---
One thing that continues to pop up in reviews of animated movies in recent years is how little new movies are relying on toilet humor. Apparently, the makers of Happy Feet Two have decided to rectify this situation. Within minutes, there is a scene involving a penguin urinating on the camera. The scene then cuts away to a reaction shot, then cuts right back to more urine! It is absolutely horrible. Admittedly, there is only one more scene involving toilet humor in the movie, but it involves a character’s head being defecated upon by skuas. It is also incredibly horrible.

The problem with that, of course, is that "Happy Feet" wasn't all that great in the first place. It was cute, sure, but despite its Best Animated Feature Oscar, it wasn't a huge step forward for the medium. Even worse, it was a self-contained film with no need for a sequel.
That's made exceedingly obvious to anyone seeing "Happy Feet Two," because it's boring, unnecessary and not exciting. What's worse, aside from the stellar animation, the film has absolutely nothing going for it, from its bland plot to its already-dated music.
--
"Happy Feet Two" won't be winning many awards; in a just world, it wouldn't win any.

"The harsh reality is that the EU has already failed"

It is  not only right-wing tories who are turning against the European Union in the UK. Even the left-leaning Guardian´s columnist Deborah Orr, who "always believed in the European ideal", now concedes that the "harsh reality is that the EU has already failed":


The desperate assumption is that the eurozone is "too big to fail", as the banks were. Would it, like the banks, simply continue quite blatantly with its bad habits, its unsquarable contradictions, if the money to bail it out could be found? The harsh reality is that it has failed already, with only fear of disorderly and unpredictable collapse keeping alive the vestiges of its grand ambitions. The trouble is that Europe, politically as well as economically, was a fine idea, but, in practice, was always hopelessly compromised. Even its supposed democratic accountability is faked. The election of members of the European parliament is more like the election of civil servants than politicians. The only high-profile MEPs tend to be those who gained their seat in order to argue against the EU's very existence.

As for the heads of state who make the political decisions, there are already more unelected people at the top table than is right or acceptable. But the technocrats are accepted anyway. Cameron may have opted out of talks on the Cannes treaty. But, as it turns out, his "people" will still be there, still throwing in their tuppence-worth, in the search for a formula that will appease "the markets". The democratic deficit in Europe has always been problematic, and now is teetering on absurd. This is not what Europe was supposed to be. I have always believed in the European ideal. But it is a struggle to identify, in the current mess, where any true expression of that ideal resides.

Amid all the concern and worry over the enormity of the task of propping up Europe lies a nagging feeling that if this institution really is too big, too dominant, too all-encompassing to fail, then it is also too big, too unwieldy, too powerful to succeed. How can something so significant and untouchable be brought to heel? What other institution could have the power to rein in such a behemoth? The IMF? Who wants it to rule the world?

The Maldives government: "What's there to discuss about flogging women"?"

The U.N. human rights chief Navi Pillay has during a recent visit urged the Maldives to end the practice of flogging women found to have had sex outside marriage:

"This practice constitutes one of the most inhumane and degrading forms of violence against women, and should have no place in the legal framework of a democratic country"

President Mohamed Nasheed, the darling of the western liberal and leftist media - probably busy planning the luxurious new floating Royal Indian Ocean golf club or taking part in the activities of the exclusive Legacy club, of which he is a member -  delegated the flogging to his foreign minister:

The government of Maldives has rejected UN calls for debating the practice of flogging women guilty of committing adultery in the island nation.
"What's there to discuss about flogging?" Foreign Minister Ahmed Naseem told Haveeru newspaper.
"There is nothing to debate about in a matter clearly stated in the religion of Islam. No one can argue with God."

Under Maldives law, women found to have committed adultery are punished with 30 lashes.
There are no estimates of how many women are flogged in the Muslim nation, but the punishment is usually done in public.
The UN rights chief's call has sparked protests in the island nation, with some protestors calling for Pillary's arrest.
Protestors surrounded the UN Building, and demanded an apology from the UN and parliamentarians.
No Debate
The Maldives government said that it will not allow any debates about penalties against female adulterers.
"Our foreign ministry will not allow that to happen," said Nassem.

A suggestion to Jon Shenk, who made Nasheed a hero in the documentary "The Island President": What about making a sequel, "The Island President II" about the president´s and his government´s policy of accepting flogging of women and the poor, exploitative conditions for migrant workers in the tiny island state?

If Nasheed does not want to discuss these subjects in public, maybe he is prepared to organise an underwater interview?
Upplagd av NNoN kl. 02:01 No comments: