Former Bank of England Governor: The Euro is doomed

Lord King, former Bank of England governor is spot on:

Lord King, who headed the bank for 10 years, said the EU's single currency system is set to lurch from crisis to crisis for years ahead.
And he warned that the drive towards political union among the 19 euro-zone nations will not help save the project from eventual disintegration.
The forecast comes in a new book written by the peer, who is better known as Mervyn King.
Upplagd av NNoN kl. 11:40 No comments:

EU "President" having a good time ...

Who says politicians and EU bigwigs are not enjoying themselves .... :-)
Upplagd av NNoN kl. 18:51 No comments:

Brexit would save Europe from itself!

This is exactly what I have been saying for a some time now:

It is those who love Europe, its diversity, its history and its humanity who should be the most enthusiastic about Brexit. A paradox? Not at all. The European Union, as currently constituted, has run out of road. It is doomed to fail, sooner or later, with catastrophic consequences for our part of the world, and the only way forward is for one major country to break ranks and show that there can be a better alternative consistent with Europe’s core enlightenment values.--

The EU faces a long-term economic, demographic and cultural implosion, and is staring down the abyss of illegitimacy. A small subset of European countries may be able to pull something off, and merge. I’m sceptical even of that, but it’s certainly one possibility. But we need a new model of European cooperation for those who realise that neither the status quo nor more integration is the answer.
That is where Brexit comes in. A British departure from the EU, if executed correctly, could save Europe from itself: it would create a plan B, a workable alternative for those countries that want to be part of an integrated Europe but are unhappy at the direction of travel.

Read the entire article by the Deputy Editor of The Telegraph, Allister Heath, here.
Upplagd av NNoN kl. 23:38 No comments: 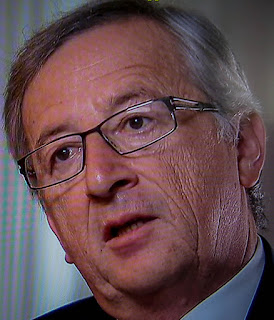 A strange man, this Jean-Claude Juncker:

The European Commission president bizarrely ordered eurosceptics to visit WAR GRAVES to try and avoid a breakdown in peace between nations.
The desperate leader warned voters not to repeat the "enormous stupidity" of two world wars in the astonishing attack.
Patronising Juncker accused Brexit voters of forgetting the role the EU has played in the years since the Second World War.

Mr Juncker warned "peace is never a sure thing" and appeared to mock David Cameron's EU deal saying the prime minister was grateful for his help in resolving his "self-induced problem".
The former prime minister of Luxembourg said: "Whoever does not believe in Europe, whoever doubts Europe, whoever despairs of Europe, should visit the war cemeteries in Europe."

The good thing is of course, that the more Mr. Juncker goes on like this, the better for those who want Britain to leave the EU.