Merkel as Ukraine "peacemaker": "When Germans speak about defense, nobody listens, especially not the Russian president" 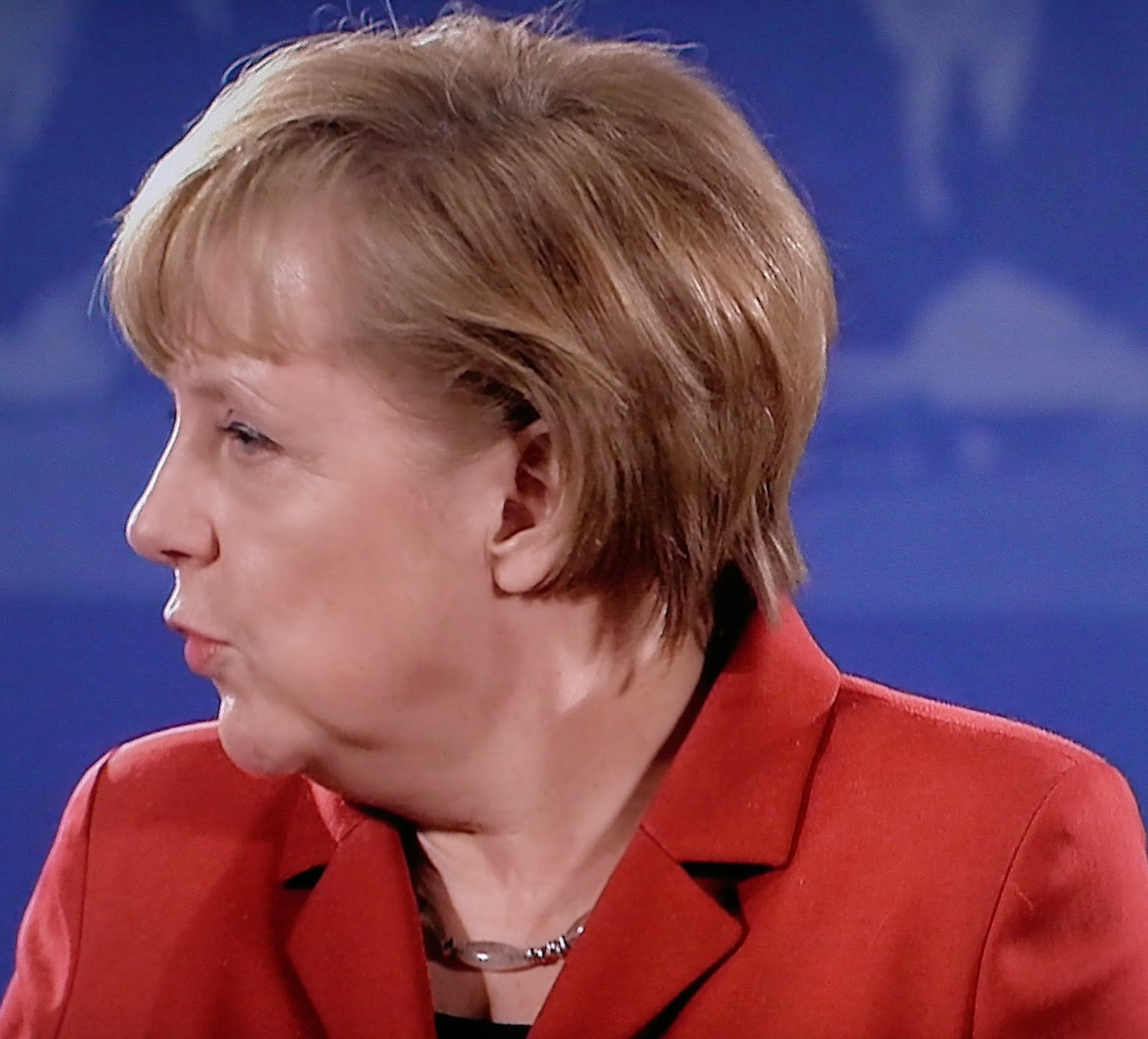 Anne Applebaum is spot on in her description of Angela Merkel´s Germany:

Since the Second World War, Germany has had no serious foreign policy record and no cadre of diplomats accustomed to solving foreign crises. Germany has no army to speak of either: At a recent NATO exercise, German troops were so badly equipped that they used broomsticks instead of guns.

When Germans speak about defense, nobody listens, especially not the Russian president.

The Ukraine crisis actually began because Ukrainians demonstrated — and risked their lives — in hopes of drawing closer to the European Union. But although the union theoretically has a foreign policy function, in practice it barely exists, not least because Germany first weakened it and now ignores it. But even without the European Union, Germany could have created a Western contact group for Ukraine — including the United States and perhaps Britain, France, Poland or the Netherlands — that would have had real defense capability and real foreign policy clout. --


Merkel has put her personal stamp on a cease-fire agreement she cannot enforce — and if it fails, there is no Plan B. She has, it is true, hinted at one: Ukraine could give up its eastern provinces, build a “Berlin Wall” around them in the form of a demilitarized zone, tighten its borders and gain time to rebuild its state. But for that plan to work in the longer term, the West would have to treat the rest of Ukraine like it once treated West Germany, reinforcing it economically, politically and militarily, in order to deter Russia.

Right now, there is no sign that Germany or anyone else is prepared to do that. Instead, Ukraine will lose control of the Donbas industrial heartland to Russian proxies whom Russia can then use to further destabilize the Ukrainian state, perhaps to take more territory, perhaps to threaten NATO. The Russian president is limited by his failing economy — but then, thanks to the Greek crisis, Europe may soon be limited by its failing economies, too.
Upplagd av NNoN kl. 20:33 No comments:

The "Siberian Express" makes its mark on central and eastern US:


The central and eastern U.S. prepared for another blast of record-breaking cold, snow and ice on Friday after already frigid temperatures shattered all-time lows.
It was the coldest morning in Chicago in 79 years. At Niagara Falls, the majestic rushing water was obscured by blocks of craggy ice. In Florida, the start of spring training felt less than springlike.

Surprise, surprise, Matthew Rosenkrans at the warmist US National Weaterh Service already points to global warming as the reason for the record freeze:

In the future, climate change may lead to more extreme weather conditions, such as this frigid winter, he added.
"More extreme events do show up in some of the modeling studies under the warming planet scenario," Rosencrans said.

Here is an interesting comparison:

In a speech to Egypt’s top Islamic authorities, President Abdel Fattah el-Sisi called for a “religious revolution.” Why? Because he believes that Islam has problems: “That corpus of texts and ideas that we have sacralized over the centuries … is antagonizing the entire world.” He continued: “Is it possible that 1.6 billion people should want to kill the rest of the world’s inhabitants…?” He then warned the assembled imams not to “remain trapped within this mindset” but to “reflect on it from a more enlightened perspective.”
However you interpret el-Sisi’s remarks, it’s clear that he believes the problems of Islam are not the fault of a tiny minority. He seems to think that a great many are to blame, and he particularly singles out Islamic religious leaders, whom he holds “responsible before Allah” on “Judgment Day.” And, most tellingly, he refuses to indulge in the this-has-nothing-to-do-with-Islam excuse favored by Western leaders. Rather, he states that “the entire umma [Islamic world]” is “a source of anxiety, danger, killing and destruction for the rest of the world” because of “the thinking that we hold most sacred.”
By contrast, after his visit to Turkey, Pope Francis compared Islamic fundamentalists to Christian fundamentalists and said that “in all religions there are these little groups.” A little over a year ago in his apostolic exhortation, he joined the ranks of those who say that terror has nothing to do with Islam by observing that “authentic Islam and the proper reading of the Koran are opposed to every form of violence.”
So the leader of the largest Muslim country in the Arab world thinks that the entire Islamic world is suffused with dangerous and destructive thinking, and the leader of the Catholic Church thinks terror is the work of a few misunderstanders of Islam.

The latest from Ukraine:

Russia-backed separatists say they have gained control of a key rail hub in eastern Ukraine.

The Donetsk News Agency, a rebel mouthpiece, quoted the rebel's so-called defense ministry as saying on Tuesday that their forces have pushed government troops out of Debaltseve and are now controlling a large part of it.
Fierce fighting on Tuesday, two days after a cease-fire was announced for eastern Ukraine, appeared to be focused on Debaltseve, which both sides claim is on their side of the cease-fire line.
Government troops and the separatists were expected to begin withdrawing heavy weaponry from the front line on Tuesday but Associated Press reporters saw no sign of that on the ground.