John Boehner, Speaker of the US Hourse of Representatives calls Putin "a thug" 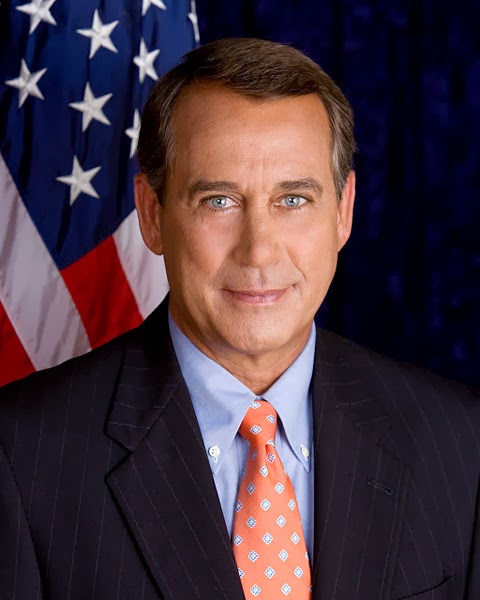 Speaker of the United States House of Representatives John Boehner (Republican) should be congratulated for speaking the truth:

House Speaker John Boehner called Russia’s President Vladimir Putin “a thug” and urged the Obama administration to do more to safeguard the interests of the U.S. and its allies in Europe.
Boehner, an Ohio Republican, accused Putin of treating Russia’s neighbors in a “disrespectful way.” The lawmaker said in an interview on NBC’s “Tonight Show with Jay Leno” that he hasn’t met the Russian leader and doesn’t want to.
President Barack Obama “ought to stand up to him and better protect America’s interests and our allies, especially in Eastern Europe,” Boehner said in the interview, which was broadcast overnight in the U.S.
Upplagd av NNoN kl. 06:19 No comments:

This is great news for Poland - and Europe:

Europe passed a “major milestone” on the way to starting commercial shale gas production as San Leon (SLE) Energy Plc said testing at one of its Polish wells was successful.
Natural gas flowed from the vertical Lewino well in a shale formation in the Baltic Basin in northern Poland at as much as 60,000 cubic feet per day during tests, Dublin-based San Leon, a natural-gas explorer backed by billionaire George Soros and Blackrock Inc., said today in a filing. The company will start drilling a more productive horizontal well no later than July, said Dennis McKee, the chief executive officer of United Oilfield Services Sp. z o.o., which worked on Lewino.
Countries including Poland, the U.K., Ukraine and Romania are keen to develop shale gas resources as a way to lower energy costs and reduce imports. Europe must get a grip on energy prices to protect growth and reduce the cost gap with the U.S., where a shale-gas revolution has cut prices, European Union Energy Commissioner Guenther Oettinger told a conference in Berlin on Jan. 21, via a link from Brussels.
“We’re confident we can show real commercial flow rates,” San Leon Chairman Oisin Fanning said in a telephone interview from London. “If you can prove the shale play in Poland, it will open up in other countries.” --

The results from the Lewino well are a “major milestone in the process of commercialization of shale gas in Poland,” McKee told reporters at a briefing in Warsaw. San Leon may bring the well to commercial production by October, after it conducts flow tests, he said. United Oilfield Services is the nation’s largest provider of hydraulic fracturing, also known as fracking.
Upplagd av NNoN kl. 03:13 No comments:


UN global warming boss Christiana Figueres has taken a high carbon footprint flight to the exclusive Swiss ski resort Davos, where she has declared that her job is "sacred":

The top climate official at the United Nations has described her role in pushing nations to contain the Earth's shifting climate as a "sacred" job.
"We are truly defining the quality of life for our children," Christiana Figueres, the U.N.'s executive secretary for climate, told USA TODAY on the sidelines of the annual meeting of the World Economic Forum in Davos, Switzerland. "We have to do everything we can because there is no plan B because there is no planet B," she said.
"I fully intend my grandchildren and great-grandchildren to be able to live on this planet. This job is a sacred responsibility," Figueres said.
Figueres' comments to USA TODAY come as assembled leaders in the Swiss ski resort are being urged to invest more extensively in cleaner energy sources in order to obviate the most pernicious effects of climate change.
"Cumulatively we have already invested over a trillion dollars into renewable energies such as solar and wind but that is still far from where we need to get. We need to be investing a trillion every year," Figueres said.

It will be interesting to see, whether Figueres chooses to perform her tear act before she leaves this gathering of the business jet set. Maybe it will be part of her Grand Finale tomorrow?:

William Browder: Putin's regime "will be gone within a year" when the price of oil falls to $60 a barrel

US shale gas has already weakened Vladimir Putin's regime, but when the price of oil drops to $60 a barrel - which could well happen in the near future - the former KGB agent will be gone within a year:

There is nothing behind the facade of Vladimir Putin's regime in Russia, says William Browder from Hermitage Capital Management.
"All it will take is a fall in the price of oil to $60 a barrel and Putin will be gone within a year. You'd be surprised how brittle the system really is," he told me at the World Economic Forum in Davos.
The "fiscal break-even price" of oil needed to balance the Russian budget is now $117 a barrel. A protracted slump in crude would force the government to dig deep into its reserve funds, and that in turn would set off further capital flight.
The hedge fund manager – who describes himself as Putin's "enemy number one" – says Russia's $499bn foreign reserves would not prove much a defence in the end. "We saw this in 2008 when everything fell apart in a few months even though Russia had the world's third biggest reserves. It wasn't supposed to happen but it did."
A drop in Brent crude to $60 is not impossible. Both Deutsche Bank and Bank of America have warned of a potential glut in oil this year as sanctions against Iran are phased out and Libya's exports revive. The US is expected to add more than 1m barrels per day (b/d) this year. The Saudis may choose not to stabilise the market by cutting output, deliberately letting crude slide below the marginal cost of production of shale.

A new Maunder Minimum on its way?: "I've been a solar physicist for 30 years, and I've never seen anything quite like this"

Forget global warming. A new Maunder Minimum may be on its way:
"I've been a solar physicist for 30 years, and I've never seen anything quite like this," says Richard Harrison, head of space physics at the Rutherford Appleton Laboratory in Oxfordshire.

He shows me recent footage captured by spacecraft that have their sights trained on our star. The Sun is revealed in exquisite detail, but its face is strangely featureless.

This solar lull is baffling scientists, because right now the Sun should be awash with activity. --


"It's completely taken me and many other solar scientists by surprise," says Dr Lucie Green, from University College London's Mullard Space Science Laboratory.

The drop off in activity is happening surprisingly quickly, and scientists are now watching closely to see if it will continue to plummet.

"It could mean a very, very inactive star, it would feel like the Sun is asleep... a very dormant ball of gas at the centre of our Solar System," explains Dr Green.

This, though, would certainly not be the first time this has happened.


During the latter half of the 17th Century, the Sun went through an extremely quiet phase - a period called the Maunder Minimum.

Historical records reveal that sunspots virtually disappeared during this time.

Dr Green says: "There is a very strong hint that the Sun is acting in the same way now as it did in the run-up to the Maunder Minimum."

Mike Lockwood, professor of space environment physics, from the University of Reading, thinks there is a significant chance that the Sun could become increasingly quiet.

An analysis of ice-cores, which hold a long-term record of solar activity, suggests the decline in activity is the fastest that has been seen in 10,000 years.

The new Gazprom tower in St. Petersburg - A monument to a dictator

Dictators and tyrants have always been keen on building huge monuments for themselves. Former KGB agent Vladimir Putin is no exception:

.... another Russian strongman is about to add his own spire, and message, to that skyline: a 465-metre tower that will serve as the new headquarters of OAO Gazprom, an arm of the state-owned giant that Russian President Vladimir Putin has nurtured into one of the biggest energy companies in the world, as well as an active tool of Kremlin power.
“This centre is a symbol of prestige for the President. You can find analogous buildings in Dubai and Pyongyang,” said Dmitry Litvinov, co-ordinator of a citizens’ group that opposes the project. The activists scored an unexpected victory last year when they forced Gazprom to move the tower to the outskirts of the city from its proposed location right in the historic heart of St. Petersburg. --

“We live in an authoritarian regime,” shrugs Mr. Litvinov. He says Mr. Putin backed down on the plans to build Gazprom’s new headquarters in downtown St. Petersburg only when UNESCO warned that it might cost the city its status as a World Heritage Site.
“Putin came to understand that the Lakhta Center had to be moved to preserve the whole idea of it,” Mr. Litvinov said. “There is no economic value to this project, it’s just about the image and the prestige of the President.”
Upplagd av NNoN kl. 04:29 No comments: