The Trump presidency: UN climate bureacracy still in a state of denial 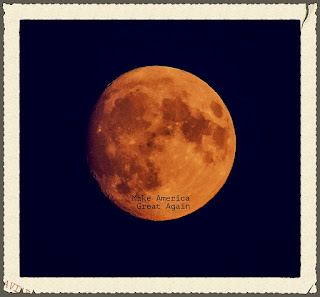 I was curious about how the vast UN climate brureacracy has reacted to Donald Trump´s election:
A search for "Trump" on the COP22 site produces an empty page!

The UN climate change establishment is obviously still in a state of denial, but they will soon wake up to the hard reality ...

Here is e.g. what is going to happen to the US energy policy, according to the Trump team:

The Trump Administration will make America energy independent.  Our energy policies will make full use of our domestic energy sources, including traditional and renewable energy sources.  America will unleash an energy revolution that will transform us into a net energy exporter, leading to the creation of millions of new jobs, while protecting the country’s most valuable resources – our clean air, clean water, and natural habitats. America is sitting on a treasure trove of untapped energy. In fact, America possesses more combined coal, oil, and natural gas resources than any other nation on Earth. These resources represent trillions of dollars in economic output and countless American jobs, particularly for the poorest Americans.
Rather than continuing the current path to undermine and block America’s fossil fuel producers, the Trump Administration will encourage the production of these resources by opening onshore and offshore leasing on federal lands and waters. We will streamline the permitting process for all energy projects, including the billions of dollars in projects held up by President Obama, and rescind the job-destroying executive actions under his Administration.  We will end the war on coal, and rescind the coal mining lease moratorium, the excessive Interior Department stream rule, and conduct a top-down review of all anti-coal regulations issued by the Obama Administration.  We will eliminate the highly invasive "Waters of the US" rule, and scrap the $5 trillion dollar Obama-Clinton Climate Action Plan and the Clean Power Plan and prevent these unilateral plans from increasing monthly electric bills by double-digits without any measurable effect on Earth’s climate.  Energy is the lifeblood of modern society. It is the industry that fuels all other industries.  We will lift the restrictions on American energy, and allow this wealth to pour into our communities. It’s all upside: more jobs, more revenues, more wealth, higher wages, and lower energy prices.
The Trump Administration is firmly committed to conserving our wonderful natural resources and beautiful natural habitats. America’s environmental agenda will be guided by true specialists in conservation, not those with radical political agendas.  We will refocus the EPA on its core mission of ensuring clean air, and clean, safe drinking water for all Americans.  It will be a future of conservation, of prosperity, and of great success. 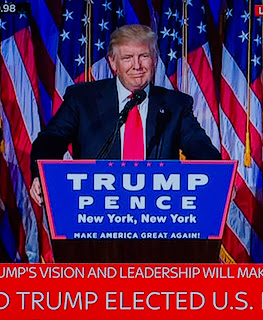 The Trump presidency is the best thing that has happened for the advancement of real environmental goals. By finally putting an end to the global warming hoax, the United States will lead the way in working for a better and cleaner environment. The billions of dollars that have been wasted in order to "combat climate change" will now be used for meaningful environmental projects:

Trump’s election also has upended the global near-consensus on climate policy, given his skepticism of global warming and embrace of the coal industry.
The United States has been the indispensable nation concerning global warming politics since the Kyoto Protocol in 1997. Environmentalists had hoped the Paris Agreement of December 2015 was the final nail in the coffin of climate skeptics and locked in a permanent, binding agreement curtailing emissions – and future fossil fuel development – for the rest of the century.

Enter Donald Trump. He is the only candidate to become a head of government in the past several years who rejects the scientific consensus on climate change. Between calling that science “a hoax” and actively supporting the U.S. coal industry’s recovery, his ascent could result in the U S. withdrawal from the 1992 Climate Convention Treaty, which underpins the Paris Agreement.
It’s difficult to underestimate how large a political earthquake this would be for many of the world’s left-leaning political classes. The primary focus of European industrial and foreign policy in the last 20 years has been built around climate change treaties, while China has dramatically adjusted its energy production system to come into alignment with U.S. and other developed-economy climate goals. Now, the U.S. will likely entirely reverse its stance, possibly putting China’s planned economy under duress.

Michael Goodwin on the Trump voters 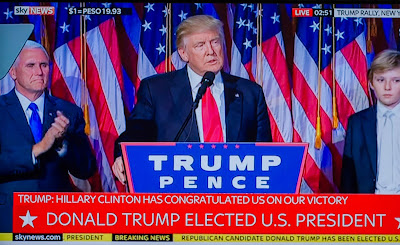 Michael Goodwin´s column in the New York Post is worth reading. Here is an excerpt:

Trump voters had the courage of their conviction to go against all their betters, all the poobahs and petty potentates of politics, industry and, above all, the fraudulent hucksters of the national liberal media.
And who, at this extraordinary juncture, dares say that Trump is not worthy of victory and of the salute of his countrymen? He has done what nobody thought he could, overcoming the doubts and scoffs every incredible step of the way.
No candidate in modern times and perhaps ever has suffered such abuse at the hands of the dominant culture. Virtually every day, nearly all the front pages and broadcasters in the entire country vilified him in an attempt to destroy him.
The late-night comics made fun of him like so much trailer trash, Wall Street saw him as a threat, Hollywood looked down on him and even the pope added his two cents of disdain.
It was dirty pool, against any standard of fairness and decency, but that was not the would-be assassins’ biggest mistake. It was that failing to destroy Trump, the elite smart set unleashed its contempt on his supporters.
The effect was the opposite of what was intended. Instead of demoralizing the Trumpsters, the nonstop attacks hardened them and made them more determined to finish what they had started.

Steve Hilton´s column on Fox News is another excellent read:

Email ThisBlogThis!Share to TwitterShare to FacebookShare to Pinterest
Tags: election, Trump, US

After Brexit, now this: 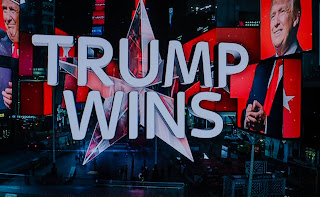 The polls, the mainstream media and the pundits were
all wrong!

Email ThisBlogThis!Share to TwitterShare to FacebookShare to Pinterest
Tags: Donal Trump, election, US

EU - the European empire - is doomed to fail

The Dutch historian Thierry Baudet has written an excellent article about the failure of the European Union empire.

Here is an excerpt:

The idea that nationalism leads to war while European unification promotes peace is therefore false. And let’s not forget that Europe has not been at “peace” over the last 50 years. During most of that period, the countries of Europe were engaged in a fight to the death with the Soviet Union, which was once again the expression of yet another anti-national philosophy – in this case communism. As the Communist Manifesto insisted, “Working men have no country.”
As you might expect, today’s attempt to bring about political unity in Europe is a major source of tensions. The political landscape in virtually every country in Europe has now been marked by the emergence of increasingly powerful parties that are opposed to the established order.

Distrust of the South is increasingly prevalent in Northern Europe, and vice-versa. Here again, it is not nationalism but the European project which is the source of the conflict. It follows that we should seek to create a Europe that is radically different to the current EU.
What we need is a Europe without a central regime: a Europe comprised of nation states, which are not afraid of national differences, and willing to cooperate with each other. The authority of nation states over their own borders should be restored, so that they themselves can decide who they want to allow in their territory.
In the service of their economic interest, they should opt for flexible visa regimes, which will nonetheless allow them to keep control of crime and immigration. We will also have to dissolve the euro to give nation states some monetary breathing space so that they can once again set their own interest rates in response to local conditions. Finally, we will have to get rid of harmonisation which undermines diversity.
Far from being a source of conflict, nationalism is the force that makes democracy possible. Without this unifying force, parliaments would be unable to take legitimate decisions. As the example of Belgium has shown, a lack of national unity can make the administration of a country extremely difficult. The irrational fear of nationalism could ultimately result in the establishment of a restrictive empire in Brussels. The time has come to call a halt and restore the nation state.