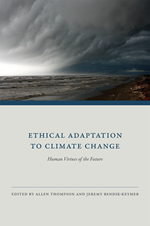 "the course of the sky is within our power"


"Worldwide governments must take responsibility for the climate and create a new Kyoto agreement that reflects justice in their grasp of human flourishing."


"Classic vices such as greed must be re-conceptualized at the global and intergenerational scales."


Welcome again to the Brave New World of academic alarmism!


Case Western Reserve University's environmental ethicist Jeremy Bendik-Keymer and Allen Thompson, Assistant Professor of Philosophy Oregon State University, offer us an interesting opportunity to see what is going on in the ivory towers of academic institutions:


Ethical Adaptation to Climate Change (MIT Press) is a call for reorganizing both our conception of good character and our understanding of institutions to allow humans to flourish in the climate we have substantially affected for the next thousands of years.
--


This new world vision is described by environmental ethicists in 17 essays focused on four areas: adapting ecological restoration to new climates, integrating ecology into justice, changing human character to be responsible for our effects on the climate, and reorganizing a globally just world where people can act in virtuous ways, as opposed to remaining individually impotent.
Without these pathways for change, Bendik-Keymer sees future generations paying a dire price for inheriting our ecological mess.
--
at the heart of living a flourishing or "good" life requires humans to have character. The center of character is responsibility for our effects on the climate system as these affect future generations, the global poor and other species. Classic vices such as greed must be re-conceptualized at the global and intergenerational scales.
Worldwide governments must take responsibility for the climate and create a new Kyoto agreement that reflects justice in their grasp of human flourishing.
--
It's a new way of thinking. Reflecting on human history, no cultures have ever thought that they themselves ought to be responsible for the course of the sky. But we have to be now, since the course of the sky is within our power, Bendik-Keymer says.
"Talk about adaptation must take us beyond mere coping strategies to full human flourishing," he says and thus, the book's subtitle of "human virtues of the future."

One of the two editors of the book, Dr. Allen Thompson, has published his own essay on his university home page. Here are a couple of excerpts :
If we accept that humanity now has the role of managing planetary
stewardship, then we can recognize the demands of this role can be met
well or badly. Thus, we see the possibility of a new form of human goodness.
Satisfying well the demands of this role will require human beings
to develop suitable and correspondingly new traits of character among
which, I argue, is a special virtue of responsibility.
--
Clearly, no one individual alone is or
could be accountable for the stewardship of life on Earth. Yet neither is
anyone off the hook. The responsibility is essentially shared; so the corresponding
excellence of character presents a standard against which
anyone, as a member of humanity, can be morally assessed
--
we lack a conceptual grasp of the emerging form of our
flourishing. Today we need radical hope, commitment to the idea that
responsibility for life on Earth constitutes a part of human flourishing,
although we don’t yet understand precisely how to flourish in that way.
--
Environmentally good human beings recognize
what is fine in and about the natural world and are habitually disposed
to act well regarding these values, thus enabling the goodness of nature
to have a substantive role in human flourishing, just as the goodness of
friends and human community—via the relevant interpersonal virtues—
can have such a role.

I'm sure climate change has done an enormous amount of damage to academia.

Too many academics come across as amateurish wordsmiths with none of the dry rigour and learning we once took for granted.

This whole climate change scandal has devastated academia and science itself. We could probably survive that.
Unfortunately the entire thing is just a smoke screen for the New World Order of human enslavement.